I’ve been working with a fascinating client recently. He fascinates me because he lives below the ‘Line of Responsibility’ and it is with such finesse that I find it astounding. I suppose I’ll have to explain this Line concept so that know what I’m talking about, but before I do that, I’ll give you an example of what he gets up to.

The other day, he had a deadline to meet, which involved dropping off a delivery of completed goods. He procrastinated in the days before the deadline and the goods were not ready on the day. This is where he dipped below the line: he called the receiver of goods and told them that the goods were ready, but his wife had forgotten to collect them on her way out that afternoon and she was supposed to drop them off. Of course, he made this call right at the end of business so that it would give him that night to finish the work. He dipped even further below the line when he did this: he told the receiver that he’d left a note on the fridge for his wife to remind her and that she’d still missed it. Then, to prove it, he hastily made up a note, stuck it on his fridge, took a photo of it, and sent through a text image of the note to the receiver, along with the emoticon of scratching one’s head, all designed to get him out of trouble!

His strategy worked, of course. The blame had been laid at the feet of his wife, and he and the receiver had a little laugh at how forgetful his wife was. My client had the rest of that night to finish the job and then he proudly delivered it himself the next day. His wife was in on the joke, too, because she knew her husband’s procrastination tendencies well and she was prepared to kindly take the rap for him.

I thank my client for this colourful example of how to live below the line. You might be getting a sense of this line I’m referring to. It’s called the Line of Responsibility and this concept will change your existence once you grasp it.

Where do you live? Above the line; where you have responsibility, ownership and accountability? Or below the line, where you have blame, excuses and denial?

He’s how my client could have operated above the line in that same scenario: He phones the recipient as soon as he knows he won’t make the deadline. He apologises and says that he needs more time. He gives no excuses but simply states this fact. He negotiates a new time for drop off. He makes sure that he completes the task within the new timeframe and drops off the goods to thank the recipient, in person, for his patience.

See how he owned his actions here? There were no stories or excuses; there was no blaming of others and no denial of the situation. He simply owned up and dealt with the problem he’d created. He was responsible for getting the job done and he remained accountable to the recipient.

Seems simple enough, right? It is simple, yet that little sentence is putting possibility squarely on YOUR shoulders. Anything you want will happen because YOU make it happen. It is entirely up to you. You take full ownership of that outcome. You are the one with the responsibility of making things happen in your life and it feels good to live above the line.

Instead, you simply own your actions, whether they be good or bad. It will free your mind to do it, and others will begin to have new trust in you as a responsible person. Get above the line this week in one area of your life and feel the difference it makes.

Here it is again (for those who like pretty things):

Perhaps it serves you to live below the line? Down here, you might get punished if you’re caught blaming others or making excuses, because sometimes, punishments are what you need. If this is the case, you can scramble your way above the line by confessing to your disciplinarian and taking the consequences as deserved.

Bear this in mind… you do not have to be below the line to get what you need. Even responsible people can benefit from being punished for things that go wrong despite their best intentions. You don’t need to make it easy for your disciplinarian by living below the line. So, take responsibility, take ownership of your actions, live with integrity, and see how much better you feel. It’s time to live above the line. 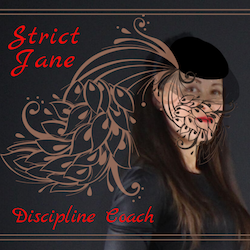 Who Is Strict Jane?

Strict Jane has specialised in working with women and men in helping them reach fulfilment in their unique need to receive physical discipline.

Strict Jane uses life coaching and disciplinary methodology to help people with deep-seated issues to reach new levels of awareness and confidence as they improve themselves and their lives as a result.

Where Is Strict Jane?

Because of 2020’s events, I am now available online.

Firstly, please complete my Application Form or send me a detailed email to introduce yourself.

You may work with me via phone call or Zoom.

You will hear my most regular updates by subscribing to my newsletter.

Join the waitlist for access to my Membership in 2021.

Phone consultations may be booked once you complete the Application Form.

‘In Person’ Consultations are arranged months in advance. Please see ‘Events’ on my home page for any upcoming trips.

Strict Jane is a Discipline Coach and specialist when it comes to managing your behaviour and mindset.